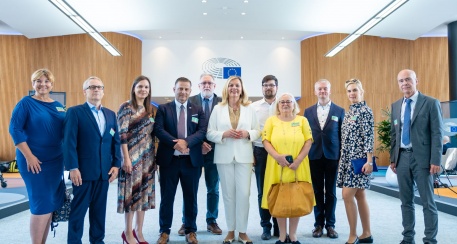 The conference "Nikola Tesla - The Starting Point" in Brussels

The company Ars Studio Avsenik has been invited by Nikola Tesla Network (based in Croatia) and by Ms. Željana Zovko, a Croatian member of the EU Parliament, to attend the conference "Nikola Tesla - The Starting Point" in Brussels. The director Martin Avsenik kindly accepted the opportunity to present company’s project "The 3D Digital Double of Nikola Tesla" to a wider interested public.

The conference was held in the Spinelli Hall in European Parliament, on Wednesday, 22nd of June 2022, and was attended by participants from Croatia, Slovenia, Hungary, Czechia, and France where new projects based on Tesla's heritage in respective countries were presented.

A 15 minutes long presentation of Tesla’s 3D Digital Double, accompanied with videos and photos, was held by Mr. Martin Avsenik, a creative mind in the 3D Digital Double Team, who has became amazed by the extraordinary life of Nikola Tesla, and decided to enable a digital comeback of a famous inventor by creating his highly realistic 3D model.

At the conference the focus of Ars Studio Avsenik’s presentation was to explain how a 3D Digital Double is created, what is its purpose and what are company’s further goals. Here’s a short recap of the presentation:

The project has been recognized by attendees as a great potential for implementation in various fields, such as museums, education, digital art, apps, VR & AR, film industry, etc.

This conference has been just a starting point of a greater story and path of Nikola Tesla, with an aim to connect all the European countries where Tesla lived, worked, studied and invented and to support innovative projects about Tesla. At Ars Studio Avsenik we are looking forward to the opportunites, connections and further development of projects inspired by Nikola Tesla's heritage.

This occasion was also the first joint live meeting after several Zoom videl calls during Covid-19 lockdown, so before heading back home after successful presentations, we took a group photo of the main speakers and participants of the conference in the premises of the European Parliament. We parted with a wish to reunite soon.