The company Ars Studio Avsenik has created an animated 3D digital double of Slavko Avsenik, which is being presented to the public for the first time. We assembled a creative team for this project, which combines all the necessary knowledge and equipment. The members of core team are Martin Avsenik as creative director and executive producer, Alexander Beim as 3D portraitist, and Rok Jagodnik as 3D designer and animator.

A digital double is a reconstruction of an individual that is displayed by using computer-generated images. The goal of the created digital double of Slavko Avsenik is to explore various possibilities of its depiction with technologies of the future. Plans for the future is additional technical upgrade of the 3D model (facial expressions, etc.) and the use of the 3D model on various occasions (online, at live events with the help of a hologram projection, placement in a museum in Begunje).

Ars Studio Avsenik offers the service of making a 3D digital double, which includes reconstruction or scanning of an individual, modeling, rigging, texturing, lighting, animation, rendering and final production. For more information send us your inquiry to ars@arstudio-avsenik.com.

HOW DID WE CREATE SLAVKO AVSENIK'S DIGITAL DOUBLE?

With the help of software and hardware for 3D rendering, a three-dimensional portrait of a person and the entire figure of the portrayed individual is created. In order to revive the created 3D model of an individual, we have to animate it.

We achieved this by recording movements of an impersonator in the studio with the equipment for capturing body movements and transferring the animation to the 3D model. When capturing movement, the most technical challenge is the process of capturing facial expressions and fingers.

The process of creating a digital double of Slavko Avsenik was demanding because it is a process of reconstruction of a deceased person. Because we wanted to capture Avsenik's image from the times of the greatest successes of the Avsenik Brothers Ensemble, only low-quality photographs from the 80's were available as a starting point.

To further detail and create a 3D portrait of a person in 3D programs, photos of the face taken from specific angles are required. Since the persons in the usual documentary photographs are not photographed from ideal angles, we first had to prepare drawings of the portrayed person, where he is shown in the desired angles. It is important that the drawings capture the exact proportions of the portrait and figure. In order to carry out the mentioned procedures, a combination of knowledge of 3D design and classical painting is required. 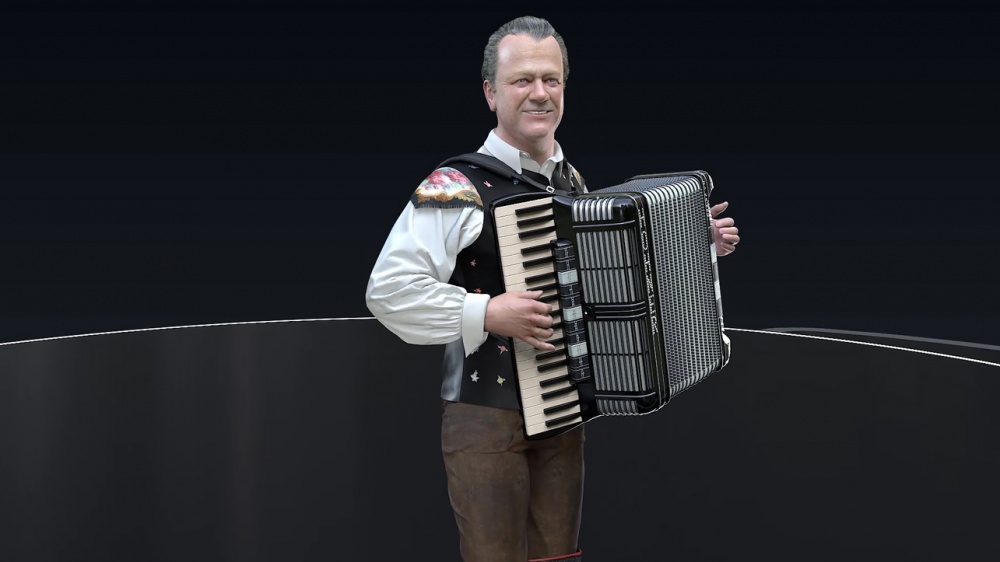 Once the 3D model gets the basic image, the texturing process follows. Creating realistic impression is very complex, especially skin where is necessary to make the skin structure with all the details such as skin color, pores, wrinkles, etc. Adequate lighting of the digital double portrait is also important to capture the resemblance to the original person.

The motion capture, which we transferred to our 3D model of Slavko Avsenik, was complex because the basic movement of the body is tied to an object – the accordion. By opening and closing of the instrument additional movement is being caused. Animation of fingers was also technically demanding. With a special camera we also captured facial expressions that we'll be added in upgrade stage. As an impersonator of Slavko Avsenik, his grandson Sašo Avsenik played an excellent role in capturing movement and playing accordion, as well as facial mimicry.

With innovative technology and programs, it is less difficult to create a 3D digital double of a living person, who can come into a studio and is being reconstructed by using the procedures mentioned above.