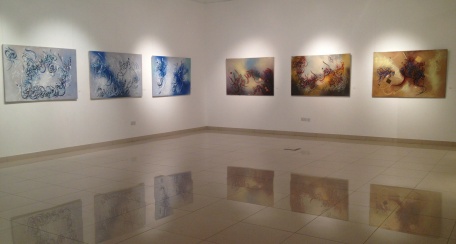 Joint Exhibition in Dubai – Echo of the Words II

In 2012 Ars Studio Avsenik announced the 1st international joint exhibition in a collaboration between artist Martin Avsenik and in Sharjah living well-known Egyptian calligrapher and artist Khalifa El Shimy. The multimedia and artistic exhibition “The Echo of the Words II” was held from 10th October to 10th November 2012 in the Gallery of Light in DUCTAC (Dubai Community Theatre and Arts Centre) in Mall of Emirates in Dubai, UAE.

The academic artist Martin Avsenik has just for this occasion produced and created an animated sound calligraphic picture by motifs from El Shimy’s paintings. The picture was displayed on the product MegaGlass. You can watch the painting "Animated Calligraphy" that Avsenik created here.

His digital painting is derived from a traditional calligraphy. In 3 sections it represents a classical Arabic calligraphy, then a sound animation with motifs derived from traditional calligraphic elements of El Shimy’s paintings and the modern implementation of calligraphic letters transformed into abstract shapes and colors. The last transformation goes into a logical continuation as a prediction of the possible development of the painting’s language.

Artist Khalifa El Shimy exhibited more than 20 modernistic acrylic paintings from his new series “The Echo of the Words II”. As Arabic calligrapher he has a tremendous affection to the Islamic art and a need to express himself through different types of Arabic calligraphy on canvas with different colors and different line styles, the modern and the classical.

During the exhibition we also held Arabic calligraphy workshops for kids and other interested indi-viduals, who learned in a practical way about the use of the eCalligraphy online program.

Over the month our exhibition has been well visited and recognized in news by Emirati media.

Multimedia Projects
The multimedia projects that we create are the upgrade of our individual products, at which we follow-up our core activities even further.
MORE >>
ART GALLERY Enter the world created by the colourful painting palette and the artist's imagination, and discover several art-works of famous Slovene and foreign artists.